Join Date: Aug 2014
Location: Cranbury
Posts: 158
hakalim, you can check Borla or Gibson exhaust systems. Both are available for Ecoboost model. You will be able to gain horsepower and torque increased by 7 – 10%: 2015 Ford Mustang Performance Exhaust Systems | Mufflers, Headers
Ford Mustang
To view links or images in signatures your post count must be 10 or greater. You currently have 0 posts.


Join Date: May 2017
Posts: 2
Is your Waranty still in effect? Is putting the Krona on keep your Waranty?


Join Date: Jul 2017
Posts: 5
Garage
Convertible
What's the best exhaust to put on a convertible? From what I understand there is a structural support that limits pipe size on the convertible?
Petawn is offline
Quote Quick Reply
post #8 of 12 Old 07-03-2017, 12:55 PM
Uncle Meat
Super Moderator

Join Date: Dec 2015
Location: Alabama
Posts: 380
Garage
Quote:
First I've heard of this!? As far as aftermarket exhausts I don't see any of them listed with a caveat stating they are not compatible with a 'Vert.

Where do you suggest to look? I've been seeing quite a few that say "*Fastback Only". I think even the Cobb Tuning setup says that. The limitation may be on the larger downpipe though? I'm definitely a novice. Just got my car last week.
Petawn is offline
Quote Quick Reply
post #10 of 12 Old 07-05-2017, 03:01 PM
Uncle Meat
Super Moderator

Join Date: Dec 2015
Location: Alabama
Posts: 380
Garage
Quote:
Okay I did some sleuthing on the interwebs and found out the S550 Mustang 'Vert's have an extra support brace to help stiffen the chassis. I posted a picture below for reference. Looks like some exhaust systems will not clear the brace. I also saw where some owners had modified the brace in order to provide additional clearance. Heck, one guy used a hydraulic press and just bent the brace enough so it would clear the pipes.

So you got two choices. Purchase a system that specifically states it will fit the convertible model, or buy whatever system you want and be prepared to make some modifications. 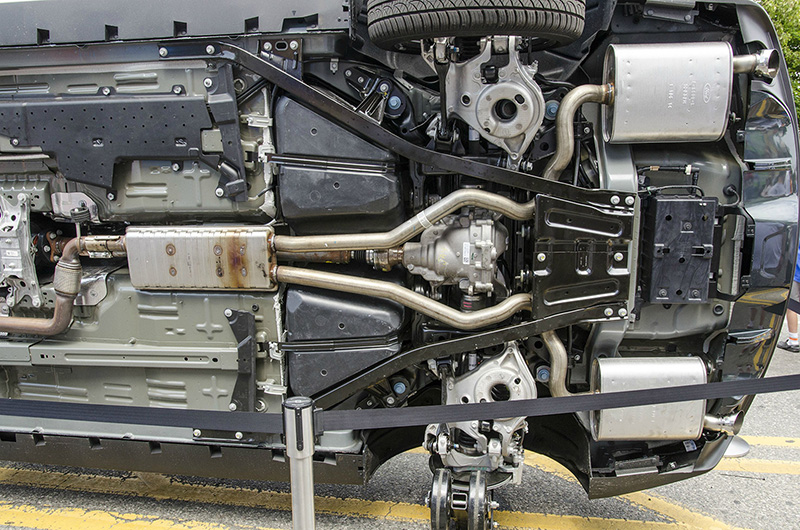